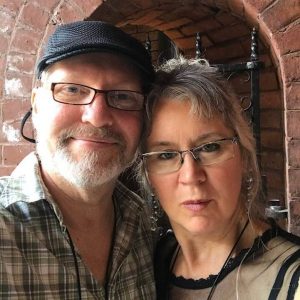 Charlie and Bonnie Shew got an invitation in the fall of 2017 to hear Brian Clement speak about health and nutrition at The University of Massachusetts. Brian is the co-director of The Hippocrates Institute in West Palm Beach Florida ( https://hippocratesinst.org ). They were sufficiently impressed with his talk that they signed up for Hippocrates’ three week “Life Transformation Program”.

They went to the institute in February 2018 and in that 3 week period they watched their classmates who came in with cancer, diabetes, lyme disease and many other maladies, go from looking close to death to being vibrant and glowing! To say nothing of how they both felt radically changed from the inside. The program is medically supervised and includes blood work and other testing both upon arrival and just before departure.  Both of their blood work numbers were SIGNIFICANTLY improved after the 3 weeks.

The main catalyst for all these massive changes in such a short time? A diet consisting primarily of raw plant based food and SPROUTS! Also a health reboot that included daily ingestion of wheatgrass juice coupled with exercise, infrared saunas, bodywork, cleansing techniques, and many wonderful lectures on all types of health related topics.

Charlie lost 45 pounds in only a couple of months and his lifelong rosacea subsided and then disappeared. His snoring also stopped, and he went from being prediabetic to enjoying normal blood glucose levels. Bonnie lost twenty pounds and has seen her cholesterol levels and blood pressure normalize in a way that had not happened with her previously good diet.

On returning home to western Massachusetts, Charlie and Bonnie decided to stay committed to the lifestyle they learned about while at the institute, which would include figuring out a way to continue ingesting large amounts of fresh sprouts and also the daily wheatgrass juice. They quickly realized that it wasn’t economically feasible for them to buy that amount of produce from third party growers and they made the decision to grow it themselves in their 4th floor apartment in Easthampton MA.

After many failed attempts at growing the sprouts properly and doing a lot of research and trial and error, they realized there is a need for a local source for people who are interested in growing their own sprouts and wheatgrass in order to reap the same health benefits the Bonnie and Charlie were experiencing.  From this, U-Sprout was born.

U-Sprout was created with the idea to provide full packages and support with everything you need to start sprouting and growing your own food at home.  We want people to be able to enjoy the process of sprouting and not go through the learning curve we went through in the beginning dealing with mold, watering issues, questions about yield, etc.